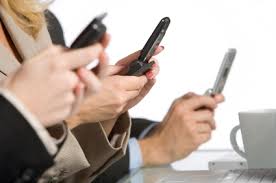 Although I should have known, but I didn’t know.  The attachment that you have – most of us have – to cell phones can be classified as nomophobia. That’s an actual clinical diagnosis. What it is, is that “rush of anxiety and fear when you realize you are disconnected- out of the loop” with the world because you lost, misplaced, left behind, your device at home or in your car.

Nomophobia – – – uhh, it seems like they could have been more clever with the nomenclature than that.  But evidently it’s an addiction that plagues lots of people. There’s even a push to have it added to the American Psychiatric Association’s diagnostic manual, which categories and classifies mental health conditions. I am one of those people who think that doctors tend to over-inflate diagnoses, especially when it comes to mental health matters.  Maybe some people do have an addiction and experience anxiety and withdrawal when they don’t have their phones.  But I happen to believe that many of them (myself included) just lack self-control.  Apparently there are tens of thousands of people who this condition describes.  As technology becomes a more prominent fixture in our lives, I suspect that it will affect a lot more people.

A nouveau Taurus, writing about my view of the world around me. From politics, to social problem, to public corruption, music and movies to pretty much anything I feel inspired to write.
View all posts by Will S. →
This entry was posted in cell phone, Cell Phone Addiction, Nomophobia. Bookmark the permalink.